The BlueIce logo appeared on the ice at the Braehead Arena for the first time when the The Braehead Clan played their first game of the season against the four times Italian Champions, Asiago Hockey in the first leg of the Aladdin Cup game on 30th August. 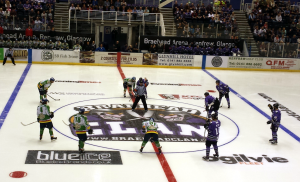 An exciting game ended with The Clan losing 3-1 with all of the points being scored in the final period.

The Clan bounced back from this defeat in the second game of the series, winning 5-2 and also winning the Aladdin Cup on penalties.

BlueIce director, Ian Brown, said “It was really exciting seeing our logo on the ice and on the players jerseys for the first time.  It took us a while to put this sponsorship deal together and it was great to finally see all of our hard work come to fruition.”

What is a Visual Identity?