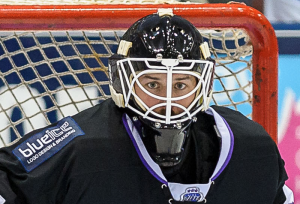 September 2014, against the Belfast Giants in the Challenge Cup.

Belfast are one of the best teams in the UK and, therefore, presented ‘The Clan’ with a difficult first opponent.

The near capacity crowd of almost 3,400 in the Braehead Arena were treated to a fantastically exciting game of ice hockey with both teams battling hard for their first win.

The game was very close throughout and with ‘The Clan’ leading 3-2 with less than 2 minutes left on the clock, the Giants scored, tying the game and sending it into sudden-death overtime. 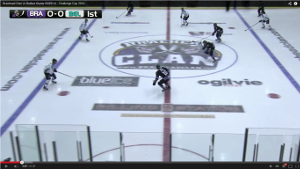 After a nail-biting extra period, the score remained 3-3 and the teams entered a penalty shoot-out to decide the winner.   The Braehead goal tender, Kyle Jones (pictured), was the stars of the shoot-out, saving all three penalties taken by the Giants and giving ‘The Clan’ the opportunity to win with their final penalty, which they scored to win the game.

Braehead Clan’s captain Matt Keith today hailed the club’s fans following Saturday’s big win, saying “Saturday’s atmosphere was electric and is definitely the best I have ever played in front of.  I know from speaking to the other new guys they felt the same. It makes a massive difference to the team.  When we were two down in the first period but the huge home support lifted us and gave us the energy to get back into the game”.

For more photographs of “The Clan” in action, click here.

What Types of Branding Projects are there?

What is a Brand?