BlueIce Brands’ t-shirts were fired into the crowd using a ‘t-shirt cannon’ at the Braehead Clan’s sell-out game against the Fife Flyers at the Braehead Arena on Friday 10th October. 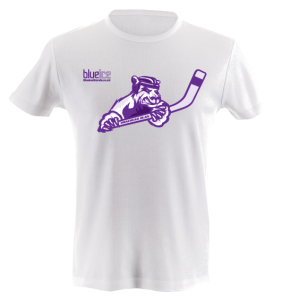 We designed these t-shirts specifically to be given away at ‘The Clan’ games, hence the ice hockey

theme of the design.  The polar bear is a play on our logo.  We decided to go with this design rather than just putting out t-shirts with our logo on it because we felt that people attending hockey games are more likely to wear them.

This proved to be true as we spotted someone wearing one of our t-shirts in Glasgow the next day!

The game was an exciting, action-packed affair with Braehead winning 4 – 3 against one of their biggest rivals in their division and edging them close to the top of the league.

BlueIce Director, Ian Brown, said “we were extremely pleased with the t-shirts and are grateful to ‘The Clan’ for giving us the opportunity to publicise  our business, especially when the arena was full, with over 3,500 people attending the game”.

What is a Visual Identity?